Map of the Silk Roads

That night, while I was sleeping on the roof of the cell, I dreamed that I was on the wing of a great bird which was flying with me towards Mecca, then to Yemen, then heading east, and after that heading south, then flying far and finally landing in a dark and green country, where it left me. I was astonished at this dream and said to myself, "If the sheikh can interpret my dream for me, he is all that they say he is." Next morning, after all the other visitors had gone, the sheikh called me.  When I had told him about my dream, he interpreted it to me, saying: "You will make the pilgrimage to Mecca and visit the Tomb of the Prophet, and you will travel through Yemen, Iraq, the country of the Turks, and India. You will stay there for a long time and meet there my brother Dilshad the Indian, who will rescue you from a danger into which you will fall." Then he gave me a travelling-provision of small cakes and money, and I said good-bye to him and left. Never since parting from him have I met on my journeys anything but good fortune, and his blessings have stood me in good stead.

This splendid dream is an excerpt from the travel narrative of Ibn Battuta (1304-1368/9), a medieval Muslim traveller whose life of voyages took him across Eurasia and Africa. He was a highly educated man, jurist and diplomat. At twenty-one, he left his home town in Morocco to make the hajj, the pilgrimage to Mecca obligatory for all Muslims.

In the decades that followed, he travelled not only to Mecca and Medina, but also to Jerusalem, Constantinople, and beyond––to Sri Lanka, Sumatra, and the coast of China.  He held legal and religious office in India and spent eight months in the Mali Empire of West Africa. He travelled with merchant caravans, suffered shipwreck, experienced the foods, customs, and beliefs of people across the Silk Roads.

Ibn Battuta's travels are just one example of the mobility of goods and travellers among the continents of Asia, Africa, and Europe, during premodern times. This monumental map, just below, reflects the point of view of other travellers.

The map follows India’s Ganges River and one of its sources, the Alakananda. Its perspective is that of a Hindu pilgrim travelling from one shrine to the next, following the path of the rivers from left to right. Beginning at Devprayag, where the rivers meet, we pass villages, temples, pilgrim hostels, and shrines, including the famous Narasimha Temple at Joshimath where Hindu priests would bring treasures from other shrines to avoid the harsh winter.

Zoom in below to see more vivid details of the natural world: the elephant saddled up for travel, the cows resting on a spit of land, the river's delicate waves. 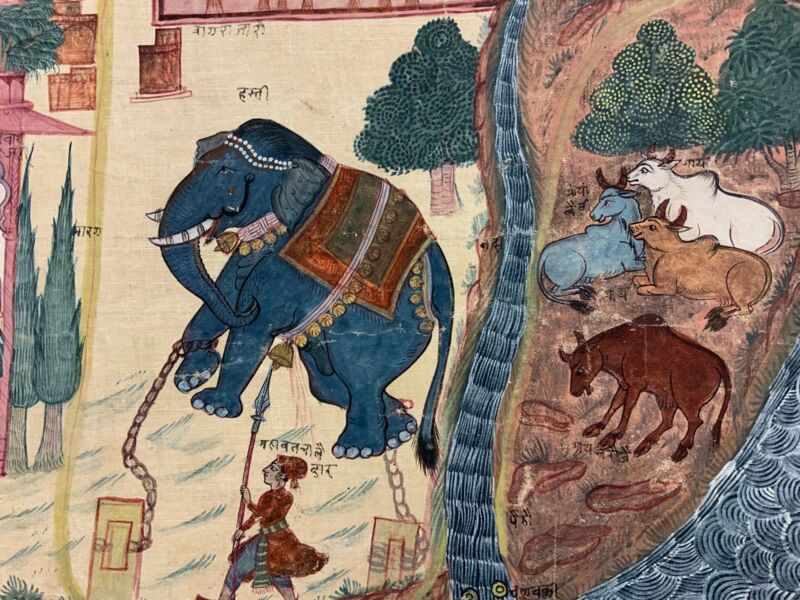 Though silk was an important commodity traded across the Silk Roads, it was far from the only traveller along these routes.  People travelled:  merchants and scholars and pilgrims, knowledge-seekers and diplomats and spies.  Goods travelled:  gold and ivory; silk, porcelain, and paper; furs and amber.  Ideas travelled: technological inventions, scientific discoveries, craft techniques. Religions and philosophies travelled. Stories travelled.

And books travelled, too.

The Silk Roads offered a platform for the exchange of craft practices, materials, and ideas across diverse geographies and cultures.

Our exhibition offers visitors new ways to see the book, as a gateway into our shared histories.

← Welcome!
Guided Tour: The Book of Hidden Stories →
Map of the Silk Roads