Music on the Page

So far, the stories on the page have been text narratives. But what about stories told, not just in text, but in music?  Western University MS M2150, a choir book (antiphoner),  is both an object of visual beauty and a musical score.

Click the audio to hear the Latin chant song from the antiphoner. Folios 73v-75r, pictured below, are sung by Kate Helsen (Assistant Professor, Don Wright Faculty of Music at Western University) and Sharang Sharma (Director of Choral Music at Huron University College), who bring the centuries-old music to life. 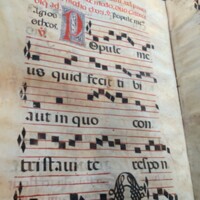 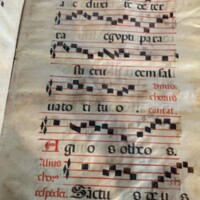 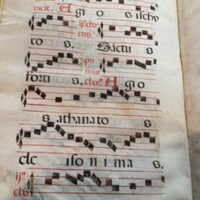 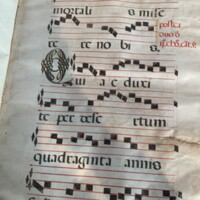 Choir books such as this one are quite large, since they needed to be read from a distance by the singers gathered in the choir. This one requires two people to move it. Just as we see large letters at the start of printed books today, readers' devices throughout this manuscript helped singers find their place on the page as they were singing and indicated where new sections began. Red letters note the beginning of sections and special points of interest; large decorated initials (like the letter "P" here) start a new chant; staff-high "ribbon initials" tell the singer where a new verse begins; yellow highlights, imitating gold leaf, set off the end of verses and draw the eye to ribbon initials. The folios were often produced by a team, including a scribe who penned the words in black and a notator who wrote the musical notes.

Inspired by the antiphoner chant, musician Afraaz Mulji composed a piano piece which explores the music of late medieval Spain, blending it with contemporary and medieval Islamic song. Join him for the performance below, and stay for a conversation with Amir Ali Alibhai, Head of Performing Arts at the Aga Khan Museum.

← Baptismal Register from Mexico City
Videos About the Objects →
Guided Tour: The Book of Hidden Stories
Stories Along the Silk Roads
Music on the Page