King, conqueror, explorer, seeker of knowledge and wonders:  Alexander the Great (356-323 BCE) is one of the most successful military commanders in world history. By the age of thirty, he established an empire that spanned two continents, stretching from classical Greece to the lands of Egypt, Persia, and India.

After his death, his fame spreads even more widely than his empire.  Stories and legends of Alexander circulate throughout the pre-modern world, from Iran and India to Italy and Iceland, from Ethiopia and Egypt to England (Stock; Zuwiyya).  In Asia, Africa, and Europe, Alexander the Great is a hero of history and legend.  Texts and images celebrate him, not only for his distinguished record on the battlefield, but also for his thirst after wonders, knowledge, and wisdom, and for his role in connecting different cultures.  Hero, warrior, prophet-king: Alexander and his stories travel along the Silk Roads, imagined and transformed by storytellers and painters in their own spoken, written, and pictorial language (Milstein).

Above (Eskandar in a Tree Pavilion, India, around 1610, AKM147), Alexander the Great (Eskandar) appears as a figure of wealth and majesty.  Persian, Indian, and European forms converge in this stunning painting. Seated in a pose that resembles that of the Mughal ruler Humayun, Eskandar wears a helmet engraved with the image of a horse-- perhaps his beloved Bucephalus--that echoes the prancing animals at upper right. The helmet's Italian all'antica style ('in the manner of the ancients') both signals the adoption of European motifs in Mughal India and participates in a revival of the shared classical past epitomized by Alexander.

By contrast, the painting below tells the story of Alexander not at the height of his power, but in his tomb.

The painting survives in a folio from a book of Amir Khosrow Dihlavi (d. 1325), created around 1450, in Delhi, India.  It shows Alexander's courtiers visiting his tomb. The Macedonian conqueror's courtiers are wearing the clothing of the medieval Islamicate world--most strikingly, robes with tiraz weavings on their sleeves.

Tiraz are delicate tapestry-woven textile armbands with inscriptions, symbols of power and honour in the medieval Islamicate world.  Popular during the Fatimid period in Egypt (909-1171), tapestry-woven tiraz often carried the name of the ruler and praise for his conquests. 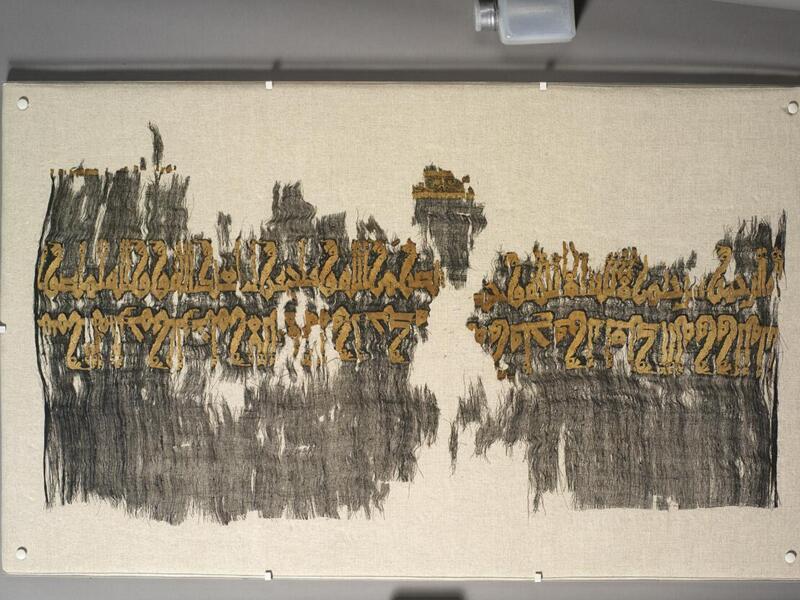 Like the inscribed tiraz tapestries, these images of Alexander interweave the strands of legend and history, classical antiquity and premodern India, stories told and retold in verse and painting and fabric along the Silk Roads.

Join Hidden Stories co-curator Dr. Suzanne Conklin Akbari on an artistic exploration of the adventures and enduring legend of Alexander the Great. Known in the Islamic world under the names Iskandar, in Arabic, or Eskandar, in Persian, his legend was reinvented for each new generation. On the one hand, Alexander epitomizes the absolute power of a mighty warrior king and his thirst to explore new horizons; but he also signifies the danger of going too far, passing beyond the limits of mortal man. Through an exploration of word and image in Western and Eastern literary sources, as well as images of Alexander in the Museum’s own collection, this lecture will show how Alexander’s encounters with the sacred — at the gates of Jerusalem, in the western tradition, and at the Ka’ba, in the eastern tradition — highlight the multiple versions of Alexander the Great that were created in the premodern imagination.

Zuwiyya, David. A Companion to Alexander Literature in the Middle Ages. Leiden: Brill, 2011. [articles on Alexander the Great in a wide range of textual traditions]

Pages on Iskandar in “Shahnama: 1000 Years of the Persian Book,” National Museum of Asian Art (Freer and Sackler; https://asia.si.edu/learn/shahnama/)

Object pages (Shahnameh manuscripts with Iskandar on them):