How can you read a closed book?

“Hidden Stories” is a collaboration of the Aga Khan Museum and The Book and the Silk Roads project, which uses a range of technologies to learn about books before even seeing the pages.

Our main approach is through micro-CT (micro-computed tomography), a technology similar to medical x-rays.  But where medical x-rays reveal the hidden structures of human bodies, micro-CT reveals the hidden structures of books.  Just as human bones or muscles absorb x-rays differently and produce different shades of white and grey in the x-ray image, so the leather, cloth, or sewing thread in book covers, the paper or parchment of the pages, and the ink-written words absorb x-rays differently. As a result, the pieces of the book and even its written text show up on x-rays as separate structures in different shades of grey. 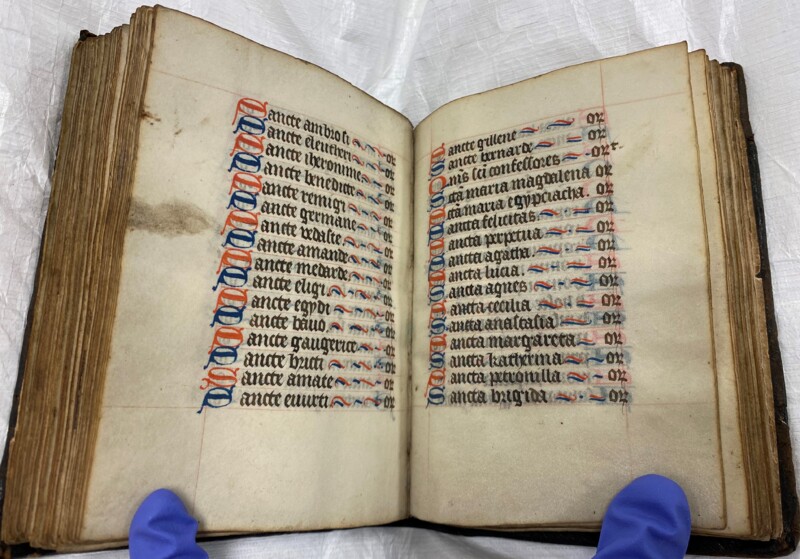 For example, take a look at this Book of Hours, a Christian book of prayers, made in France in the 15th century (Canon Grandel’s Prayer Book, Western University, Archives & Special Collections, MS BX2080.C365 1500).  The text of the book is written in iron-gall ink on paper. Under x-ray imaging, the metal in the text would reflect the radiation and become legible in the images.

Micro-CT is one step beyond regular x-rays. Regular x-ray radiography projects a stationary x-ray beam at a body and takes one image at a time.  Micro-CT–– micro computed tomography––projects a narrow x-ray beam through the object to a high-resolution detector behind.  Then either the x-ray source and detector are rotated, or the object is. (Luckily, books are less prone to motion sickness than a human patient.)  During the 360° of rotation, the CT gathers and compiles many narrow data slices, giving a researcher many possible ways of looking through the object. These data slices can be computationally assembled into a three-dimensional digital model of the object.

Watch the video above, created by Andrew Nelson, chair of the department of anthropology, at the University of Western Ontario.  This is how Canon Grandel's Book of Hours looks under micro-CT imaging.  The metal in the text reflects the radiation and turns ink into light.

With micro-CT, you may read all the pages of the book at once, without opening its covers.

Micro-CT helps scholars and scientists to look inside fragile ancient scrolls and books when these are too fragile or too damaged to open. In 2016, Brent Seals and his research team were able to virtually unroll and read a 1700-year-old charred document, the En-Gedi scroll.  The scroll was far too damaged and burnt to unroll or read with the naked eye––but x-ray images revealed the ink on parchment and allowed researchers to decipher words.

Projects exploring other advanced x-ray technologies have likewise been focused on the recovery of text. In 2016, a group led by Erik Kwakkel and Joris Dik reported on their use of macro x-ray fluorescence spectrometry (MA-XRF) to “see through” the leather on a medieval book’s spine and identify the text on the fragment of a medieval manuscript used as a liner. In 2017, book conservators at the Morgan Library, Maria Fredericks and Frank Trujillo, collaborated with Brent Seales and Paul Dilley and their research teams (including Melissa Moreton and others) to decypher a badly damaged Coptic Egyptian biblical text from the Morgan Library.  (To learn about experimentally rebuilding the Coptic Egyptian manuscript, see Melissa Moreton’s blog.)  And, as recently as 2021, a research team led by Jana Dambrogio used a dental micro-CT scanner to unfold and read undelivered seventeenth-century letters without breaking their wax seals.

Our team uses micro-CT for another purpose: not to read the pages, but to see books’ inner structures. This allows us to see how the makers and users of books put books together; how they repaired books; how they rebuilt books over time. The hidden stories we find are not concealed words, but the books’ long afterlives and the work of human hands.

One of the earliest discoveries of the Book and the Silk Roads project happened thanks to collaboration with Western University’s Andrew Nelson, of the department of anthropology, and rare books librarian Deborah Meert-Williston. 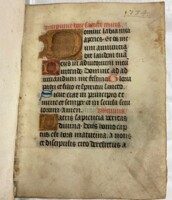 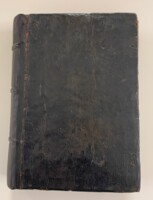 The book in question is a re-bound medieval prayer book in Western’s Special Collections:  Book of Hours: Canon Grandel’s Prayer Book, France, Lille, 15th century, Western University, Archives & Special Collections, MS BX2080.C365 1500. Based on the styles of the script and decoration, scholars believe that this book was made in France, during the late 15th century. Specifically, it is a Book of Hours, an abbreviated form of the Divine Office intended for personal use, listing the prayers a devout Christian should recite throughout the year. A note on a page inside, “Aurait appartenu au chanoine Grandel (would belong to Canon Grandel),” indicates that the book came to the possession of François-Joseph Grandel (d. 1815), a canon of the Collégiale Saint-Pierre de Lille, who may have kept the book when the Collégiale Church was destroyed during the French revolution. It is this note that gives the manuscript its name, "Canon Grandel’s Prayer Book". The book’s covers are much younger than the pages themselves: the boards are made of a precursor to modern cardboard, and are typical of an inexpensive commercial bookbinding of the 18th century (Nicholas Pickwoad (1994), "Onward and Downward: How Binders Coped with the Printing Press before 1800", in A Millennium of the Book: Production, Design and Illustration in Manuscript and Print 900-1900, edited by Michael Harris and Robin Myers, Publishing Pathways 8, Winchester, St. Paul’s Bibliographies, pp. 61–106).  When this book was re-bound, its old covers were thrown away. Scholars lost the early part of the book’s story those covers would have told: how it was put together, understood, valued.

In 2019, Nelson and Meert-Williston micro-CT scanned this book in collaboration with researchers at the University of Toronto. 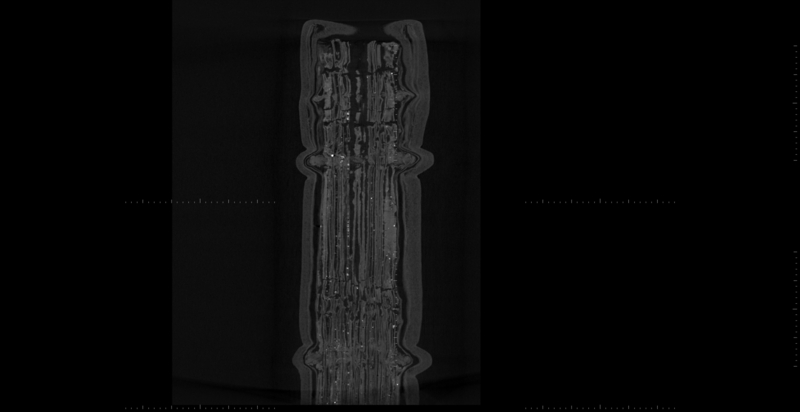 Our team discovered that micro-CT scanning can reveal what we call “ghost bindings”: that is, empty sewing holes and other traces that have been left by medieval bookmakers that are now lost.

The micro-CT scan exposed four parallel rows of holes, evenly spaced along the spine between the current sewing supports. The holes pierce the central fold of each gathering, marking the now unused sewing stations from a previous binding. We take these to be impressions of a lost, earlier binding structure, a “ghost” binding visible to us only from the x-ray images. By using a curved plane reformat to flatten the spine along the sewing path—a similar manipulation to those used by dentists when taking panoramic x-rays—we could observe a full set of holes in a single frame.

This evidence and the stories it tells us lie deep inside the book’s spine, hidden and inaccessible to book scholars.

Not all of the evidence visible from our scan was immediately meaningful to us; or, to put this another way, the application of micro-CT does not relieve historians of the burden of interpretation, nor of its challenges and risks (from confirmation bias to plain error). When we reconstruct early bindings from the traces revealed by micro-CT, we must also be aware of the multi-layered, multi-temporal nature of binding history. The evidence revealed by a scan might represent a current binding, a previous one, or separate elements of several bindings.

Yet the layered traces themselves promise a compelling new way for scholars to recall, detect, and describe the life of a single book through time.

Some of the stories that books have to tell are not human. This is a micro-CT scan we performed with Giovanni Grasselli’s Geomechanics Group at the University of Toronto. 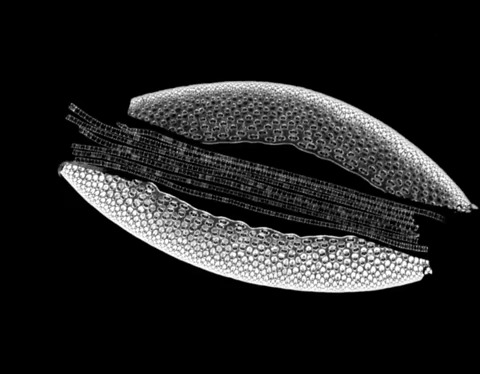 The little book is not written on paper or parchment; it is written on palm leaves.  It is a modern palm leaf manuscript in pothi style, bought by a backpacker in Indonesia and given as a gift to Book and the Silk Roads collaborator Chris Piuma.

In the micro-CT scan, the plant nature of this book’s materials is revealed.  The covers are made of carved bamboo, with vascular bundles containing the xylem and phloem pores in the bamboo that carried water and carbohydrates throughout the living plant. And you also see the cell structures of the palm leaves, sometimes showing up as denser white because ink has been rubbed into the cell cavity.

Added by human hands, string runs through the holes in the middle of the leaf, creating continuity and unity, binding the book together: then and now, part of its hidden story.