Along the Silk Roads, books come in many formats. Although the history of books is often told as a story of development (manuscript to print, scroll to codex, ancient and medieval to modern), it is more accurate to think of several dominant book formats and technologies circulating simultaneously.  Each format has large and small variants, from monumental books and works of high artistry, to the humble, ephemeral, and workaday. 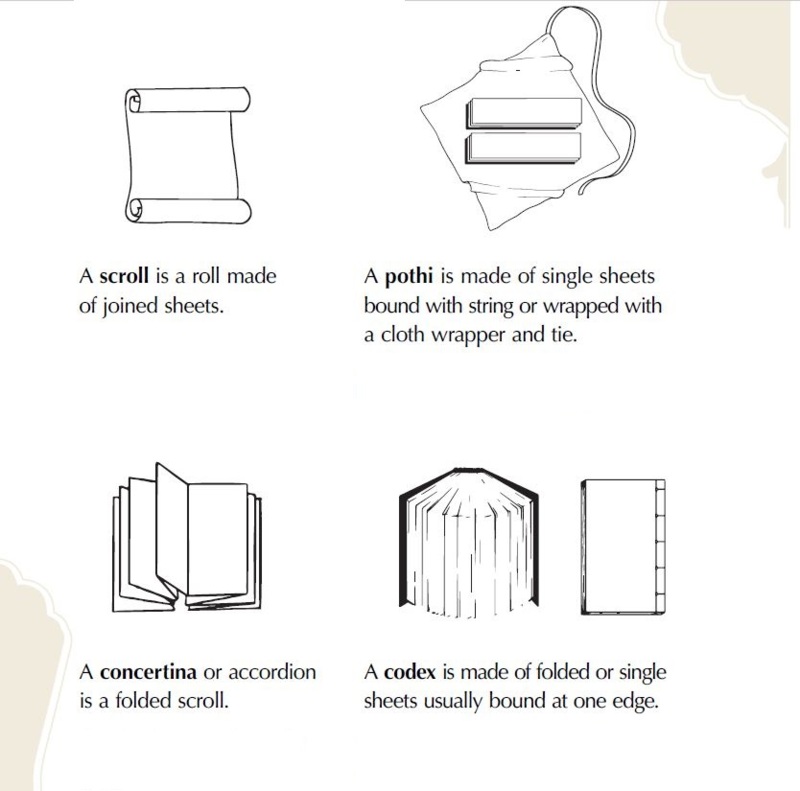 Single Leaf: a single discrete writing surface, which might serve a variety of documentary, informational, devotional or protective purposes.

Scroll: a long continuous writing surface. In our phones and computers, we still refer to this technology (as in the “doomscrolling” many of us have done over the past year). Handmade scrolls and rolls are rolled up, except for the part currently in use.

Concertina: a scroll, unrolled and then folded back and forth into pleats that form pages. Developed in China, the concertina combines the benefits of scroll and pothi : the concertina is continuous, like a scroll, but its folds divide the text into easily navigable pages, like a pothi.

Codex: sheets of a writing surface (usually paper or parchment) are stacked together into gatherings, folded in half, and sewn or glued onto a spine. These sheets are protected by covers.

Pothi: long thin sheets of a writing surface (usually palm leaves or paper, sometimes even fabric lacquered to make it stiff) are stacked loosely on top of one another and protected by wooden boards. In some styles, a string runs through holes in the middle of the leaves to keep them together.

A single book format may be shared by multiple cultures, language groups, and confessional identities. This similarity may speak to a history of cultural or religious interaction––for example, in the pothi form shared by Hindu, Jain, and Buddhist communities in this exhibit; or the codex form shared by Muslims, Christians, and Jews, from Kaifeng to Ethiopia. Or the story may be more complex––as in the scroll, deeply (and differently) meaningful for a wide variety of communities in time and space. Single communities may also deploy multiple forms––as with Ethiopian codices and healing scrolls, or Tibetan pechas and scrolls. 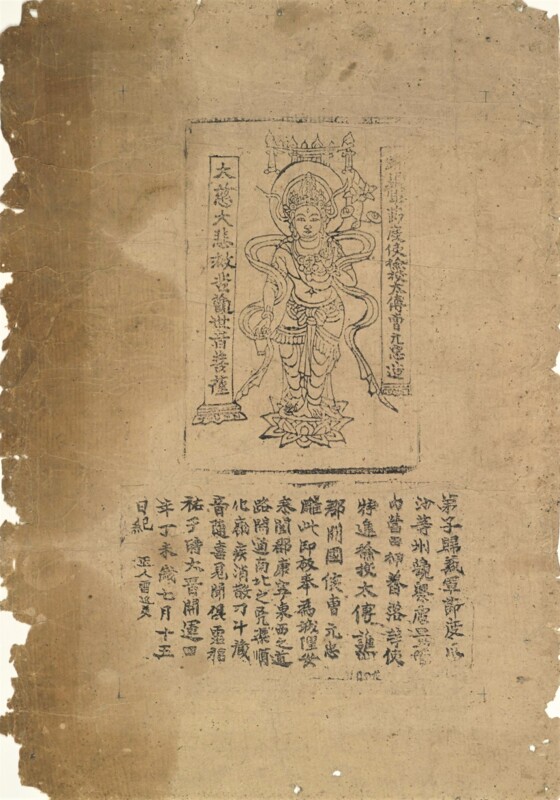 Our journey begins with the two oldest items in this exhibition.

At left is a devotional print wishing blessings on the city of Dunhuang: one of possibly hundreds or thousands of identical prints made for the city’s celebrations on the night of a full moon in 947CE, at the height of the annual summer Ghost Festival in China. Amazingly, this print survived a thousand years past the event it commemorated, sealed away behind a wall amongst some 50,000 other books and documents in the famous Cave 17 of the Mogao Buddhist cave complex near Dunhuang. The only document of its kind in Canada, this is the first time this leaf has been shown to the public in many years.

The festival day it commemorated happened over 1074 years ago.  Yet the blessings of peace and prosperity it invokes––"let diseases disappear, let all be steeped in happiness and good fortune"––continue to resonate. 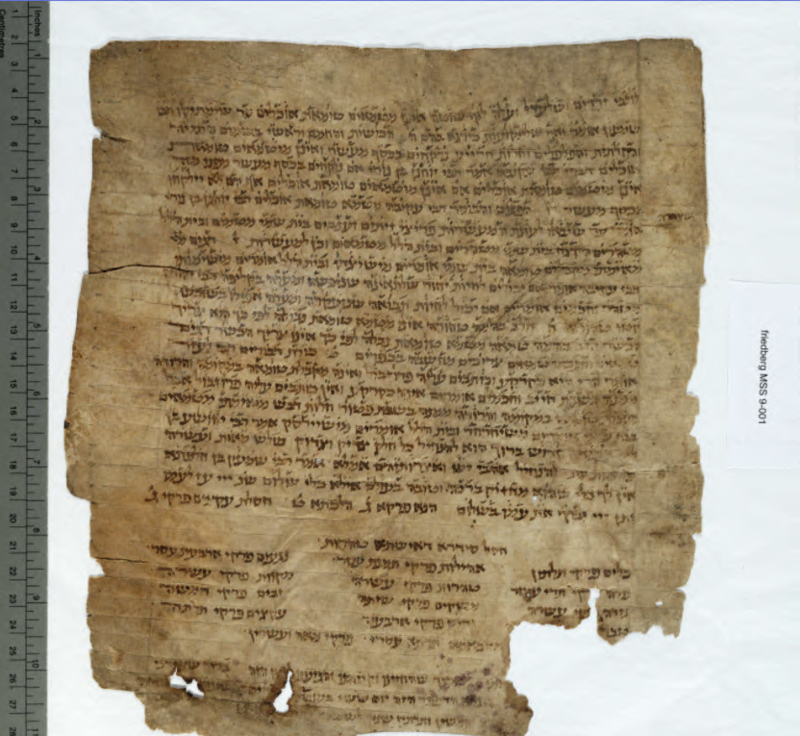 Some single leaves once belonged to bound codices. At right are leaves of parchment:  These Mishnah (Oral Torah) leaves come from the Cairo Genizah, the famed storeroom discovered in the attic of a synagogue in Cairo, Egypt, containing 400,000 fragments of Jewish texts and Fatimid administrative documents dating between the 9th and the 19th centuries. In the Jewish tradition, sacred texts in Hebrew cannot be discarded, so the Genizah held these objects until they could be properly buried in a Jewish cemetery. In this case, the documents were forgotten. The resulting treasury of manuscripts, circulated across the Mediterranean and as far as South Asia, attests to centuries of close interactions among Jews, Muslims, and Christians.

These leaves come from the Tractates Niddah and Ukzin, part of the final section of the Mishnah named the Tohorot (‘Purities’), pertaining to the laws of purity and impurity regarding the dead, food, and the body. These leaves were part of a codex, a book form that emerged in the Mediterranean as early as the 2nd century CE and was shared across faith traditions. Leaves from the original manuscript are now dispersed across collections worldwide.

Scrolls have a single long writing surface, rolled up except when in use. Scrolls may be read horizontally or vertically, as seen in the examples here. The orientation often relates to the type of information it contains and how it is read and displayed. Vertically-oriented scrolls may contain decrees, prayers, or incantations; horizontal scrolls often contain literature and religious texts. Long scrolls are necessarily made of many individual sheets of material (papyrus, parchment, silk, or paper) glued or sewn together to form one long continuous roll. If you look closely, you will see where each section is joined together.

The codex (plural, codices) is a book form that emerged in the Mediterranean as early as the 2nd century CE and was shared across faith traditions. In a codex, folded or single sheets of papyrus, parchment, or paper are stacked together and usually sewn or glued at one edge, creating a spine. These sheets are often protected by a covering of cloth, paper, or animal skin (leather or parchment). 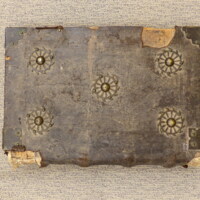 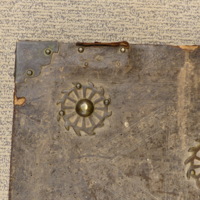 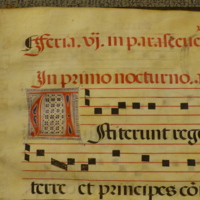 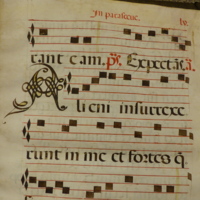 Western University, Archives & Special Collections, MS M2150 is a choir book or ‘antiphoner’ with chants for the Christian Holy Week of Easter. Its pages include biblical text in Latin (pictured here, the Psalms), musical notation, and elaborately decorated initials.

This enormous book, 60 by 43 cm (or 24 by 17 inches), is so heavy that it can only be moved by two people. The book would have been displayed open so that its musical notation could be seen by all singers.

This copy features wheel-shaped bosses on its cover, protecting against damage and perhaps evoking the emblematic wheel of St. Catherine. 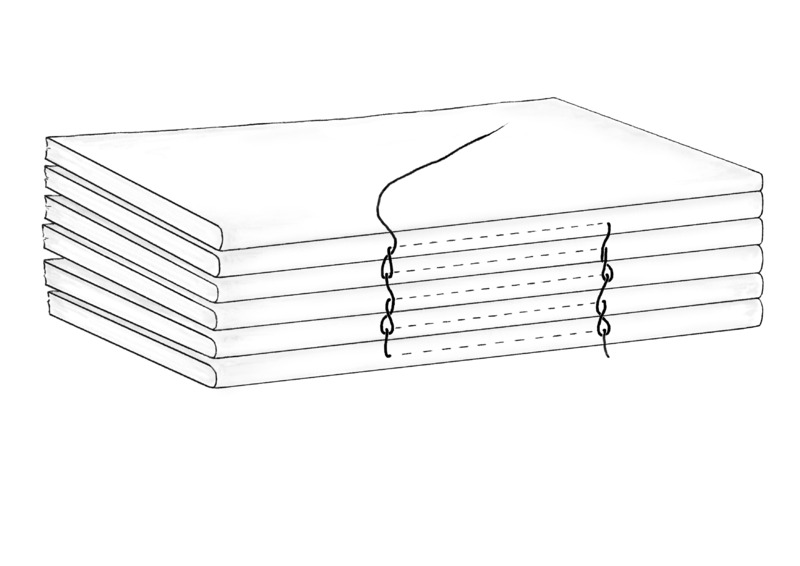 Illustration of a link/loop stitch sewing on an Islamic book, by Karin Scheper

Most codices are sewn books, bound together by thread. The link or loop stitch was the most common type of sewing used on early codices. Folded sheets, gathered together into sections or gatherings, are sewn with thread in a looping pattern creating tear-drop shaped links on the spine of the book. The sewing is usually not seen, since it is hidden and protected under the book’s covering.

The earliest evidence of this versatile and flexible sewing dates to the 2nd century CE and comes from the Coptic Christian community of Roman Egypt. With the spread of Christianity, this technology was adopted across the Mediterranean and beyond, by bookmakers in Ethiopia, Europe, Byzantium, Armenia, Georgia, and Syria -- and was adapted for use in Islamic books as well. The link stitch was a shared cultural technology. Each Silk Road culture modified the stitch to suit the physical needs of their books (Georgios Boudalis, The Codex and Crafts in Late Antiquity (2020, University of Chicago Press); J.A. Szirmai, The Archaeology of Medieval Bookbinding (1999, Ashgate)).

The codex is perhaps the most diverse in form, taking on a different shape and structure to suit the needs of each culture. The codex in the Muslim world developed with distinct features, borrowed from early Christian books and forms circulating in the Middle East.

Learn more about the features of Islamic manuscripts here.

Pothi was originally a format designed for long thin palm leaves in India.  Where palm leaves do not grow, other materials were used, allowing for larger formats.

As a technology, pothi form allows for easy replacement if a single leaf becomes damaged, and it encourages the reader to focus deeply on a single page at a time when reading or teaching. A variety of methods, from string, to page numbering, to a single line drawn diagonally across the leaves, can be used to keep the pages in order.

The form of binding that defines pothi books – loose, stacked leaves that may be connected by sewing, or by a string that runs through a central hole or series of holes—is known as pothi in Sanskrit and pecha in Tibetan.

Pothis are believed to have had a widespread influence on other book formats––for instance, in the development of concertina books in China, and samut khoi (or parabaik) in Cambodia, Laos, Sri Lanka, Thailand, and Myanmar, which replicate the flat page of the pothi but in a folded form.

Both books below are religious texts in the pothi format; neither is written on palm leaves.

The Nepalese Pañcarakṣā sūtra (Sutra of the Five Protectresses) is a collection of Sanskrit Buddhist phrases (mantra) to treat illness, prevent disaster, and grant wellbeing. This particular pothi book is inscribed on paper.  It was made in Nepal, Kathmandu, during the 18th century (Thomas Fisher Rare Book Library, Tibetan MSS 00015).

The goddesses below are deifications of the individual mantra collections (dhāraṇīs) held within the text. They give the text its name: the book contains five (pañca in Sanskrit) collections of the protectoresses (rakṣā in Sanskrit). TThe text continues to be used during festivals in today’s Nepal.  These verses would be recited by practitioners and offerings likely would have been given to the goddesses. The mantra collections (dhāraṇī-s) from these texts could also copied on to physical objects and used as amulets--for example, protective mantras could be copied onto cloth and then tied to one’s wrist, or they could be copied to paper and tucked into a pendant.

The mantra collections (dhāraṇī-s) in this text compilation would first detail the goddess of a particular dhāraṇī, then set the teaching into a frame story where the Buddha is seen to be preaching the dhāraṇī, and finally, give testimonial stories that would back up the teaching. 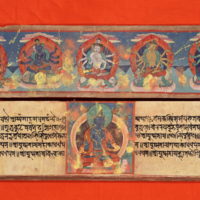 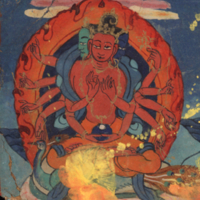 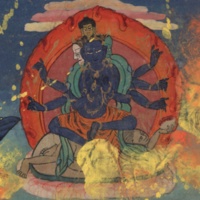 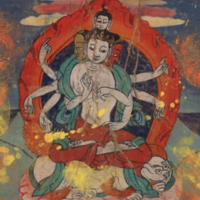 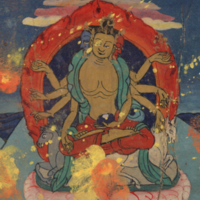 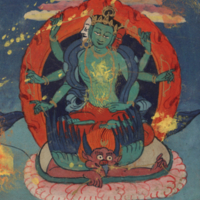 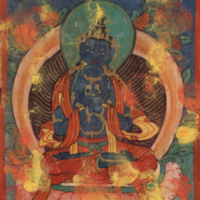 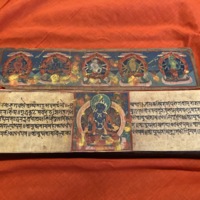 The Burmese book of Buddhist scriptures (Kamawa-sa) includes selections written in Pali from the Tipitaka (literally, ‘three baskets’) of Therevada, the most ancient form of Buddhism.  Its text is inscribed on gold-coated cloth in chunky, square tamarind-seed script (magyi si sar); its purpose is as a gift offering to a monastery to commemorate the taking of religious vows. Sometimes such cloth pages were made from the robe of a respected elder monk, lacquered and coated in gold. 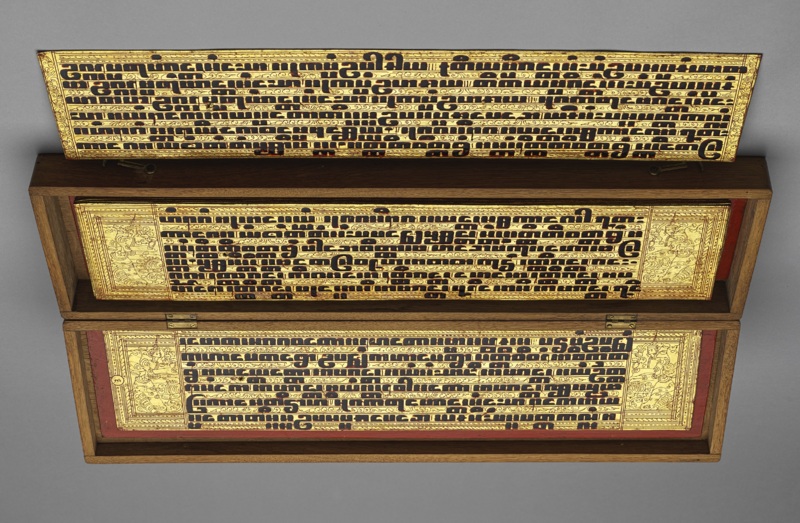